The unemployment rate has shrunk to 6.8 percent in July, as compared to 7.8 percent in June, data released by the Centre for Monitoring Indian Economy (CMIE) on Monday showed. The July jobless rate is the lowest since January when it was 6.5 percent.

India’s overall unemployment rate fell to its lowest in six months in July with a sharp decline in jobless rate in rural areas as agriculture activity picked up during monsoon. 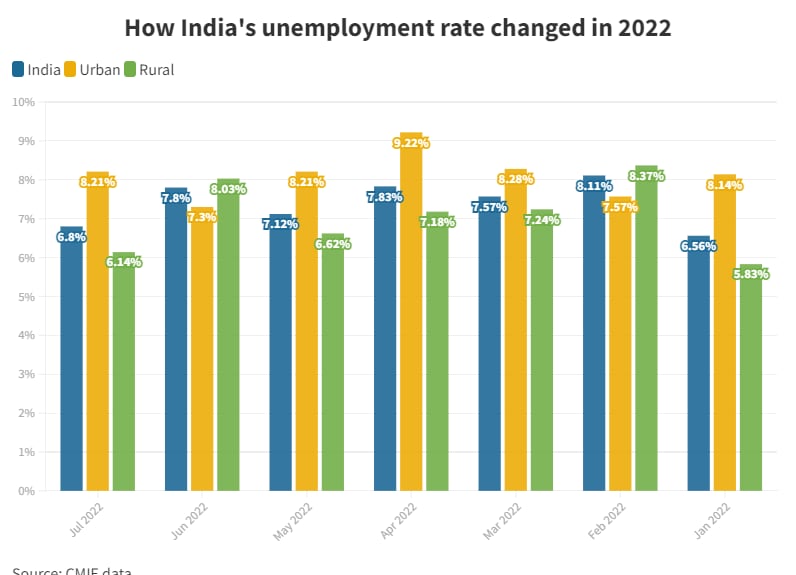 The increase in the urban unemployment rate comes at a time when several startups are laying off employees in massive numbers due to a fund crunch and the tech sector is witnessing high attrition.
TeamLease Services Vice President and Business Head Ajoy Thomas said increased agricultural activity helped reduce the jobless rate in rural India. "There was a drop in unemployment because rural India provided much-needed jobs, owing to increased agricultural activity," he told CNBCTV18.com.
In the long-term, the jobless rate is projected to trend around 6.50 percent in 2023, he said.
Among states, Haryana has the highest unemployment rate of 26.9 percent, followed by Jammu and Kashmir (20.2 percent), Rajasthan (19.1 percent) and Bihar (18.8 percent). The lowest jobless rates in July were recorded in Chhattisgarh (0.8 percent), Odisha (0.9 percent) and Meghalaya (1.5 percent), showed CMIE data.
The government last week said that available Periodic Labour Force Survey (PLFS) data indicates that the unemployment rate is on a declining trend in the country.
In a written reply to the Rajya Sabha on Thursday, Minister of State for Labour and Employment Rameswar Teli said all-India unemployment on usual status for persons of age 15 years and above in 2020-21 was 4.2 percent against 4.8 percent in 2019-20 and 5.8 percent in 2018.
The urban unemployment rate was 6.7 percent in 2020-21, 6.9 percent in 2019-20 and 7.6 percent in 2018-19, he said, adding that comparative rural unemployment stood at 3.3 percent, 3.9 percent and 5 percent, respectively, according to the PLFS report.
Check out our in-depth Market Coverage, Business News & get real-time Stock Market Updates on CNBC-TV18. Also, Watch our channels CNBC-TV18, CNBC Awaaz and CNBC Bajar Live on-the-go!