IT companies struggle to protect margins amid concerns of worsening attrition

IT companies struggle to protect margins amid concerns of worsening attrition

IT companies are struggling to protect margins due to elevated employee costs in order to tackle worsening attrition in the sector.

Following Tata Consultancy Services' (TCS) opening of the corporate earnings season last week, HCL Technologies is scheduled to release its financial results for the April to June quarter on Tuesday.

IT companies are struggling to protect margins due to elevated employee costs in order to tackle worsening attrition in the sector. Analysts expect the trend in IT margins to continue going forward, despite robust demand for technology across other sectors.
Companies such as TCS reported a deterioration in attrition rate in the IT services division, rising to 19.7 percent from 17.4 percent in the previous three months. The company's employment surpassed the 6 lakh-mark during the quarter with the addition of 14,136 workers.
By comparing the anticipated HCL Tech profits with the TCS numbers from Friday, it is possible to gain an overall understanding of the effect this has had on the IT sector.
Net profit
Tata Consultancy Services (TCS) on July 8 reported a net profit of Rs 9,478 crore for the April to June quarter, falling short of Street expectations. Since staff expenditures and high attrition continued to eat into the company's margin despite robust demand, the net profit decreased by 4.5 percent when compared to the prior quarter. Further, a CNBC-TV18 poll of analysts has predicted that HCL Tech will declare a net profit of Rs 3,297 crore for the three-month period, a decrease of 8.2 percent from the prior quarter. Revenue in dollar terms
A regulatory filing revealed that TCS’s revenue in dollars climbed 1.3 percent sequentially to $6,780 million. Its quarterly revenue was pegged at $6,812 million by analysts in a CNBC-TV18 poll.
TCS's revenue growth in constant currency terms came in at 3.5 percent on quarter, as against analysts' expectation of 3.5-4 percent. However, HCL Tech's revenue in dollar terms is expected to rise 1.3 percent sequentially in the quarter ended June, and at 2.5-3 percent in constant currency terms.
Margin
Concerns about deteriorating attrition were further raised when TCS reported a margin, or the gap between income and expenses, at 23.1 percent, 186 basis points lower than the prior quarter. 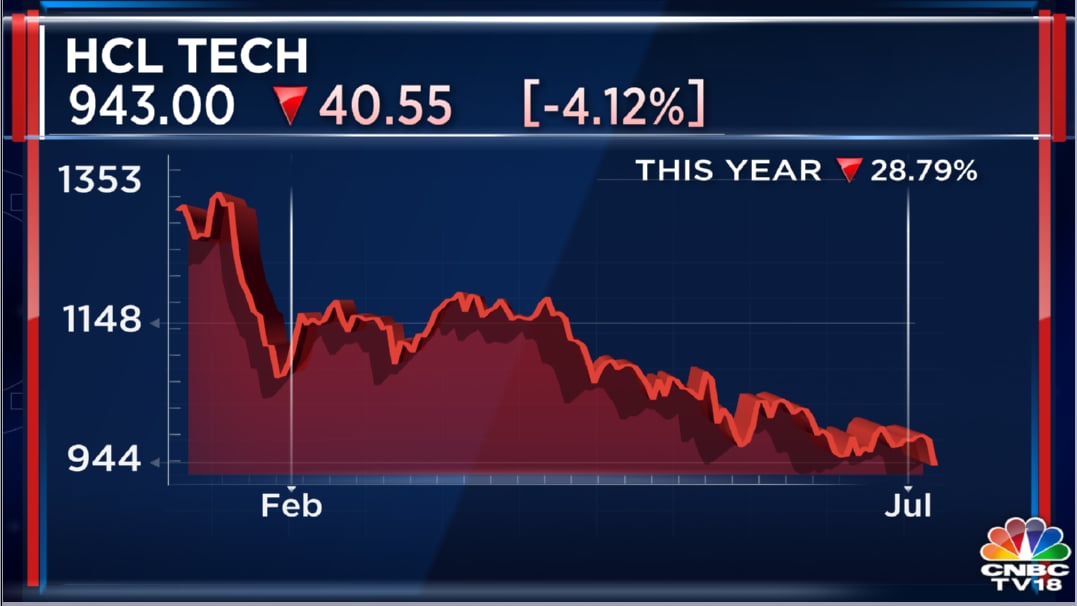 Furthermore, HCL’s margin is projected to be 17.6 percent for the April to June period, which is significantly lower than HCL Tech's target of 18 to 20 percent for the year ending March 2023 and 40 basis points lower than the prior quarter.
According to analysts, HCL Tech will retain its forecast of 12–14 percent revenue growth for the fiscal year ending March 2023.
Also read:
TCS kicks off earnings season — net profit misses Street estimates as worsening attrition bites into margin
Check out our in-depth Market Coverage, Business News & get real-time Stock Market Updates on CNBC-TV18. Also, Watch our channels CNBC-TV18, CNBC Awaaz and CNBC Bajar Live on-the-go!