For better or for worse, a few brands/companies around the world have become synonymous with the names and personalities of their founders or leaders — Bill Gates and Microsoft, Jeff Bezos and Amazon, Elon Musk and Tesla, Apple and the late Steve Jobs and now, Nothing and Carl Pei.

The late Steve Jobs casts a long shadow. The Apple co-founder has become the gold standard for keynotes — who can forget the way he gleefully toyed with the audience at Macworld 2007 before he so casually unveiled the original iPhone and changed the world forever? Or that one presentation when Jobs, in his trademark black turtleneck and blue jeans, strode onto the stage clutching an A5 paper envelope, from which he pulled out the original MacBookAir, to gasps of surprise from the audience?

Carl Pei, the founder of Nothing, has drawn the inevitable comparisons to Jobs as he, over the past few weeks, masterfully used social media to slowly drum up extraordinary buzz over his company's first smartphone — the phone (1); no easy task considering the overpopulated smartphone market. It's a bit like trying to have your voice heard during a sold-out concert. Incredibly enough, Pei managed just that, making the launch of phone (1) possibly the most exciting tech event of the year.
Also Read:
Nothing phone (1) to start at Rs 32,999, will be sold on Flipkart from July 21
Two days ago, as I watched Pei — unassuming in a white shirt, sitting by himself in an empty London theatre — unveil the phone (1), the comparison with Jobs came to mind, except, in my case, it was just how unlike each other both men are. Where Jobs was brash, aggressive, charismatic and extravagant in his approach, Pei was understated, earnest, enthusiastic and spoke lovingly on the phone (1), projecting the image of a man that cared more about his product than the company's bottom line.
I realised then that I probably would not have paid the same attention to Nothing if it had been “just another” startup. I realised I was so intrigued by the phone not just because of its striking, gorgeous design, but also because this was a company started by a man who, while he was at OnePlus, through deft use of social media marketing, nearly convinced me to ditch my iPhone for a OnePlus 5. It is not for nothing that Carl Pei has been compared often with another charismatic frontman for a global tech brand — the late Steve Jobs.
For better or for worse, a few brands/companies around the world have become synonymous with the names and personalities of their founders or leaders — Apple and Jobs, Bill Gates and Microsoft, Jeff Bezos and Amazon, Elon Musk and Tesla, Twitter and Jack Dorsey, and now, Nothing and Carl Pei. 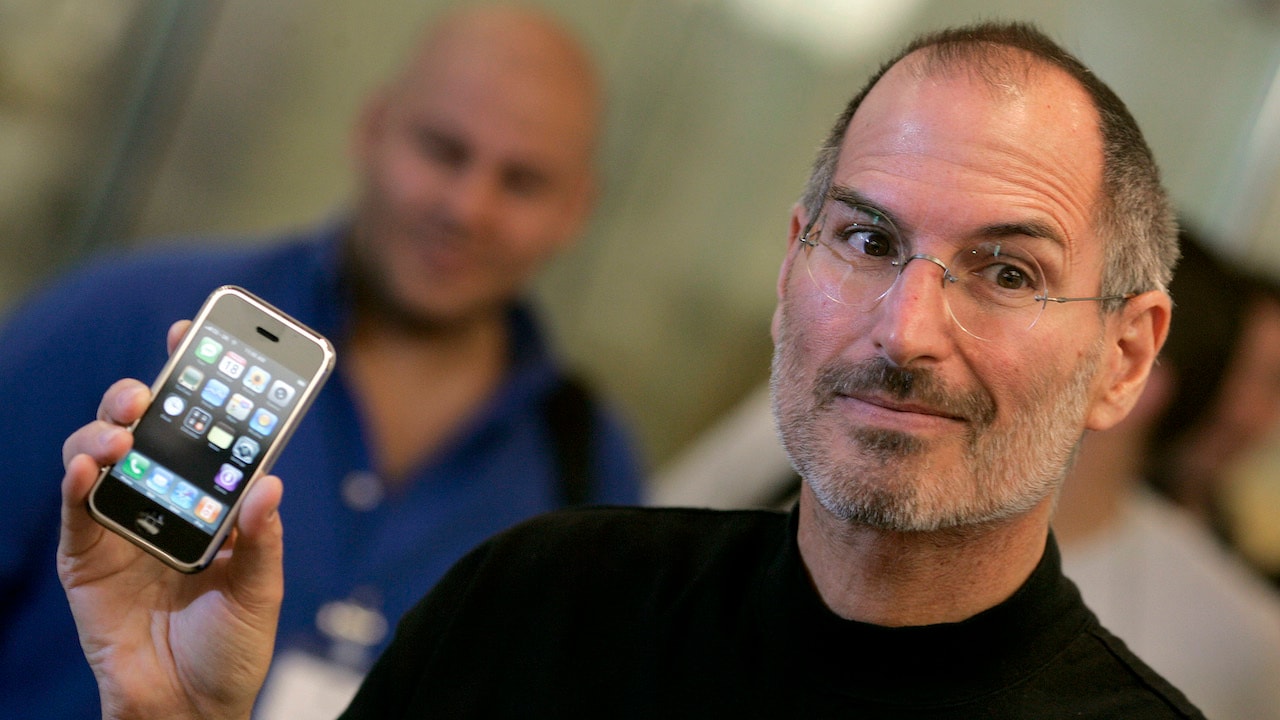 The late Steve Jobs with the original iPhone in 2007. (Image: Reuters)
I don't know whether or not Pei appreciates the comparisons to Jobs, but if Tuesday's event showed us anything, it is that Pei has his own style of presentation, his own approach to marketing and is a consumer first, and smartphone maker second.
Pei's entire approach to Nothing’s design philosophy is to break from type — “Make tech fun again” is the company motto and one way of going about it is making devices that not only give bang for your buck, but are also unique looking. Not a single pair of Truly Wireless Stereo earphones out there look similar to the Nothing ear (1), and not a single phone — not even the iPhone, my phone of choice — can claim to be as fun to look at as the Nothing phone (1). Plus, Pei has the body language of someone who'd much rather his products do the talking, as loquacious as he might be on social media.
All of this is not to say Pei is not flamboyant — one look at the official images on Nothing’s website, in which Pei, dressed in hip-hop chic, strikes various poses, is enough to see he is anything but. Even his tweets are self-assured and tongue-in-cheek, bordering on snide. But in person (on the TV screen, at least), Pei appears sincere and understated, more than willing to take the backseat to his products. Carl Pei (Image: Nothing)
While the comparison between Pei and Jobs might be inevitable, it would perhaps be doing him a disservice.
The late Steve Jobs had his own, inimitable way, Carl Pei has his.
This brings me back to my original question: would I have noticed Nothing if it had not been for Carl Pei? I might have, eventually, considering how fun the company’s devices look — I am nothing if not a tech geek at heart. But chances are that I would have looked past the brand’s name had it not come firmly attached with Pei’s.
Now, I am curious to see what Nothing comes up with next, but I am also curious to see the kind of tech evangelist Carl Pei will grow into — he didn’t have the chance at OnePlus, which was part of a large conglomerate. He certainly has the chance now, and everything points to Pei being the driving force behind Nothing becoming an exciting, fresh brand.
Only time will tell whether or not the allure around this company will last, but one thing’s for certain — at least for the moment, Nothing is quite something.
Also read: Google Doodle honours James Webb telescope's deep field photos of the universe
Check out our in-depth Market Coverage, Business News & get real-time Stock Market Updates on CNBC-TV18. Also, Watch our channels CNBC-TV18, CNBC Awaaz and CNBC Bajar Live on-the-go!