COIN is down 10.76 percent over the last 24 hours, trading at $55.96 at the time of writing. That’s a 77 percent drop from its price of $251 at the start of 2022. And as the crypto rout continues, analysts continue to slash their price targets for the exchange.

Investment banking giant Goldman Sachs has downgraded the rating of global crypto exchange Coinbase from 'Neutral' to 'Sell'. The exchange has been struggling to sustain operations as the long crypto winter continues to add selling pressure on various cryptocurrencies.

Goldman analyst William Nance also cut his price targets on the Coinbase stock from $70 to $45, which suggests a 20 percent downside from its current price of $56. Nance mentioned "continued downdraft in crypto prices" as the reason behind the downgrading.
"We believe current crypto asset levels and trading volumes imply further degradation in COIN's revenue base, which we see falling 61 percent YoY in 2022, and 73 percent in the back half of the year," read the firm's client note.
Also Read:
You can now earn crypto when you shop; all you need to know about shop-to-earn
Coinbase recently axed 18 percent of its workforce as its operating expenses ballooned to $1.7 billion in Q1 of 2022. The exchange also shut down its Coinbase Pro service, giving its competitors a chance to leverage this position of weakness.
"Coinbase faces a difficult choice between shareholder dilution and significant reductions in effective employee compensation, which could impact talent retention," Nance said to Bloomberg.
COIN is down 10.76 percent over the last 24 hours, trading at $55.96 at the time of writing. That’s a 77 percent drop from its price of $251 at the start of 2022. And as the crypto rout continues, analysts continue to slash their price targets for the exchange.
According to Bloomberg data, when the US markets closed on Monday, Coinbase's valuation stood at $12.4 billion with "20 buy ratings, 6 holds and 5 sell recommendations." The average price pegged by analysts stood at $117, which is the lowest ever recorded, albeit 2x the current price.
Also Read: El Salvador President & Bank of England predict bright future for Bitcoin; China says BTC heading to zero 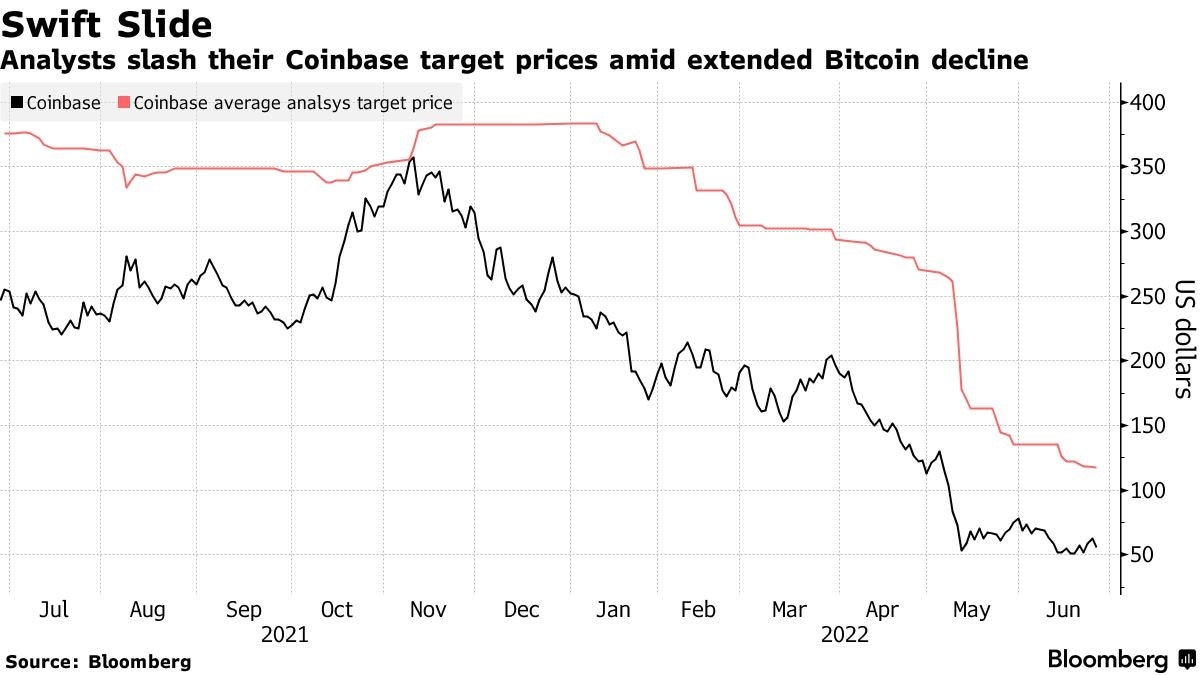 While Coinbase took some flak, Robinhood scored some points. Although Robinhood also witnessed a target price cut from $11.5 to $9.5, Nance upgraded the stock from 'Sell' to 'Neutral'. HOOD responded well to the upgrade, jumping more than 4% from its opening price on Monday.
The analyst reasoned that the stock was facing headwinds but had arrived at the correct valuation after the substantial correction. It was last trading below its target price at $9.12, which means it lost 50.54 percent YTD, trading at $18.44 at the start of 2022.
In the Goldman client note, Nance wrote that the rating was revised as analysts saw "a more balanced risk-reward, but "fundamentals are still very weak for HOOD, in our view, as continued declines in retail trading risk appetite have weighed on active users and margin balances."
Also Read: Explained: Mempools and their importance in the Bitcoin mining process
"Longer-term, we believe HOOD needs to see progress on more recurring revenue streams and a return to user growth and engagement levels for shares to outperform, and while we don't see this occurring near term, a combination of valuation support and a significant interest rate tailwind over the coming quarters are enough to move us to a Neutral rating," he added.
Check out our in-depth Market Coverage, Business News & get real-time Stock Market Updates on CNBC-TV18. Also, Watch our channels CNBC-TV18, CNBC Awaaz and CNBC Bajar Live on-the-go!