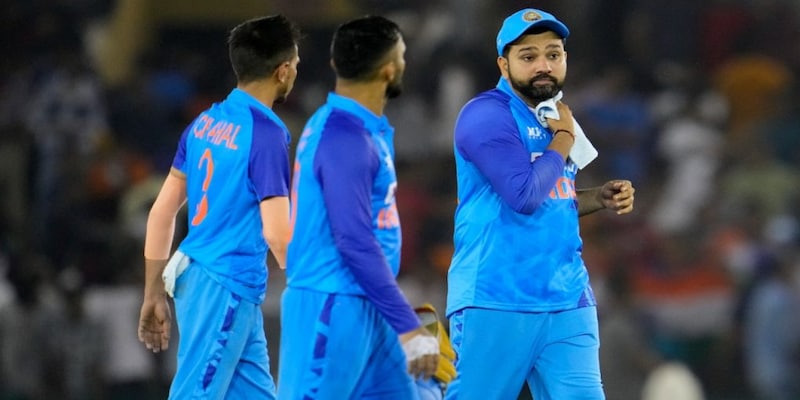 With only five more T20I matches to go for Team India before it begins in the ICC T20 World Cup campaign in Australia, captain Rohit Sharma will be looking for his bowlers to fire all cylinders in the second T20I at Nagpur as the team looks to level the series.

India will look to bounce back and level the three-match series against Australia when the two teams clash in the second T20I in Nagpur on September 23.

Australia are leading the series 1-0 after they defeated the hosts in the series opener at Mohali on Tuesday. The visitors recorded their highest chase against India in the format.
At Mohali, Australian captain Aaron Finch won the toss and opted to bowl first. Opener KL Rahul,  who in the recent past has come under the scanner for his sluggish start in T20s, showed an aggressive side of his batting as he blasted 55 from just 35 balls. Rahul was supported by Suryakumar Yadav who played a fine cameo of 46 off 25 balls. Lower down the order, Hardik Pandya blasted 71 in a mere 30 deliveries as India ended the innings at 208/6.
In response, Australian all-rounder Cameron Green, who was sent up to open the innings with Finch, hammered a blistering 61 from 30 balls. Australia did slow down in the middle overs, but Green's good work at the top was carried forward by wicketkeeper-batsman Matthew Wade who applied the finishing touches. He took just 21 balls to score 45 runs to guide Australia home in 19.2 overs with 4 wickets to spare.
Bowling a concern for India
In Mohali, India's poor bowling was exposed to a great extent. Despite Harshal Patel's brilliant spell of 4-0-17-3, Australia were able to chase down a 200 plus target without much fuss. The fast bowling trio of Bhuvneshwar Kumar, Umesh Yadav and Harshal Patel all bowled at an economy of over 12 runs. Leg spinner Yuzvendra Chahal despite picking the wicket of big hitter Tim David, was carted for 42 runsin his spell.
India's inability to defend totals is being exposed. Since June, India have failed to defend totals in six matches with Ireland coming agonisingly close in chasing a target of 226 runs.
Bhuvneshwar Kumar's poor form with the ball is one of the reasons for teams' successful chases against India. The fast bowler, who had made a name for himself by bowling pinpoint yorkers in the format, has failed to deliver in the death overs in recent games. Against Australia, he leaked 52 runs from his four overs. In the Asia Cup in the two crucial Super Four matches against Sri Lanka and Pakistan, he gave away 30 runs and 40 runs respectively.
Compounding India's bowling woes is the absence of Jasprit Bumrah. The speedster was included in the Indian squad for the series against Australia but was left on the bench at Mohali due to a lack of match fitness. The Indian coaching staff would be fretting over Bumrah's fitness and would be hoping that he is match ready for the game in Nagpur.
Other bowlers like Harshal Patel and Yuzvendra Chahal, both of whom will be playing in the T20 World Cup, should also pull up their socks as relying only on Bumrah and Bhuvneshwar won't help the team's cause.
Also Read: India sweat over Jasprit Bumrah's fitness to resolve death bowling woes
Not many worries for Australia
World Champions Australia would be high on confidence after the successful chase against India. What will further boost the team's morale is the fact that they were able to win the match in the absence of several of their key players. Ahead of their tour of India, all-rounders Mitchell Marsh and Marcus Stoinis along with fast bowler Mitchell Johnson were ruled out of the series owing to injuries. Dynamic opening batsman David Warner also has not travelled to India as he was rested for the series ahead of the World Cup.
The stars of the show for Australia were Green and fast bowler Nathan Ellis, both of whom are not part of the Australia T20 World Cup squad. While Green hit a fifty, Ellis with his fast bowling picked three wickets.
With the team having found the winning touch, Finch will not be looking to alter the playing XI.
Also Read: Six players to watch out for in India vs Australia T20I series
India's possible XI
KL Rahul, Rohit Sharma (C), Virat Kohli, Suryakumar Yadav, Hardik Pandya, Dinesh Karthik (WK), Axar Patel, Bhuvneshwar Kumar, Deepak Chahar, Yuzvendra Chahal and Jasprit Bumrah
Australia's possible XI
Aaron Finch (C), Cameron Green, Steve Smith, Glenn Maxwell, Josh Inglis, Tim David, Matthew Wade (WK), Pat Cummins, Nathan Ellis, Adam Zampa, Josh Hazlewood.
Conditions and pitch
Bouts of rains are likely to play spoilsport during the course of the match. A good batting surface with some help for the spinners could be on offering for the match
Weather Updates
At night the weather should mostly cloudy with a stray shower late. The temperature will be around 24° C.
Match time and where to watch
The match begins at 7.30 pm IST. It will be shown live on the Starsports network. The match will be also live-streamed on Disney+Hotstar.
Check out our in-depth Market Coverage, Business News & get real-time Stock Market Updates on CNBC-TV18. Also, Watch our channels CNBC-TV18, CNBC Awaaz and CNBC Bajar Live on-the-go!