Trade setup for Tuesday, November 22: The Nifty50 appears to be in a short-term negative trend, warn experts. Here's what the technical charts suggest.

Indian equity benchmarks fell on Monday, extending losses to a third straight session, dragged by losses in financial, IT, oil & gas and metal shares. A sell-off across most major markets around the globe on fears of a global slowdown owing to fresh COVID restrictions in China sent negative signals to Dalal Street.

The Nifty50 has formed a long negative candle on the daily chart, reflecting the ongoing correction in the market, according to Nagaraj Shetti, Technical Research Analyst at HDFC Securities.
The 50-scrip index has given up immediate support of the previous month, at its 10-day exponential moving average, at 18,250, he pointed out.
Key support for Nifty Bank stands at 42,000
"The Nifty Bank has continued to reflect a tug of war between the bulls and the bears, forming a doji candle on the daily chart," said Kunal Shah, Senior Technical Analyst at LKP Securities.
The index fell 0.2 percent to settle at 42,346.6 on Monday — within 300 points of an all-time high touched last week.
Shah sees lower support for the banking index at 42,000. "The bears are forming a grip around the 42,500-42,600 zone, a level if breached will lead to a sharp short covering move towards 43,500-44,000 levels," he said.
Here are key things to know about the market ahead of the November 22 session:
SGX Nifty
On Tuesday, Singapore Exchange (SGX) Nifty futures — an early indicator of the Nifty index — gained as much as 61 points or 0.3 percent to 18,266 ahead of the opening bell on Dalal Street.
Global markets
Equities in other Asian markets largely slipped on Tuesday, with a weak handover from Wall Street. MSCI's broadest index of Asia Pacific shares outside Japan was down 0.3 percent at the last count.
Japan's Nikkei 225 was up 0.7 percent, but China's Shanghai Composite was down 0.1 percent and Hong Kong's Hang Seng down 1.1 percent.
S&P 500 futures edged 0.1 percent higher. On Monday, the S&P 500 fell 0.4 percent, the Dow Jones 0.1 percent and the tech stocks-heavy Nasdaq Composite 1.1  percent.
What to expect on Dalal Street
HDFC Securities' Shetti believes the Nifty has switched to a negative short-term trend.
"The index is approaching a crucial support zone around 18,100-18,000 levels, which is expected to be a make-or-break level for the market. A failure to stage a sustainable bounce is likely to open sharp weakness in the market," he said.
Key levels to watch out for
The maximum call open interest is accumulated at the strike price of 18,300, with 2.4 lakh contracts, and the next highest at 18,400, with 2.2 lakh contracts, according to provisional exchange data. The maximum put open interest is at 18,000, with 1.4 lakh contracts, and at 17,900 and 17,500, with one lakh each.
This suggests strong resistance at 18,300 and a key cushion at the 18,000 mark.
FII/DII activity
Foreign institutional investors (FIIs) remained net sellers of Indian shares for a second trading day on Monday, according to provisional exchange data. 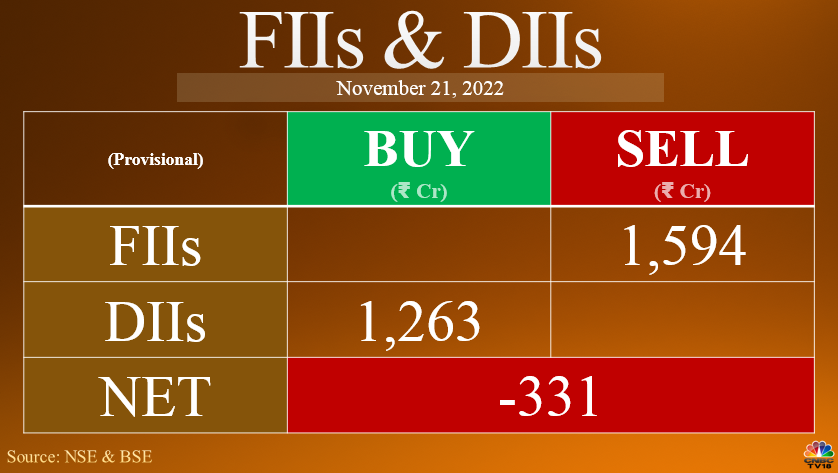