Trade setup for Wednesday, November 16: Momentum in the Nifty50 may continue to 18,600-18,700 levels in the near term, say experts. Here's what the technical charts suggest.

Indian equity benchmarks ended a choppy session in the green on Monday, amid cautious gains across most other major markets around the globe as investors weighed hawkish remarks by Fed officials against a better-than-expected US consumer inflation reading last week that rekindled hopes of an earlier end to interest rate hikes.

The Nifty50 has formed a reasonable positive candle on the daily chart with a minor lower shadow, reflecting the emergence of buying interest following a couple of days of choppy moves, according to Nagaraj Shetti, Technical Research Analyst at HDFC Securities.
"One may expect further upside in the near term," he said.
More upside likely in banking
"Momentum in the Nifty Bank remains strong and the banking index is likely to test 43,000-44,000 levels," said Kunal Shah, Senior Technical Analyst at LKP Securities.
The Nifty Bank scaled a record closing high on Tuesday.
"Lower-end support is at 41,500, which will act as a cushion for the bulls. The PSU bank rally is likely to continue on the upside along with participation from private banks," he added.
Here are key things to know about the market ahead of the November 16 session:
SGX Nifty
On Wednesday, Singapore Exchange (SGX) Nifty futures — an early indicator of the Nifty index — dropped as much as 109.5 points or 0.6 percent to 18,385 ahead of the opening bell on Dalal Street.
Global markets
Equities in other Asian markets saw mixed moves, ignoring overnight gains on Wall Street, amid growing optimism about a pullback of hikes in benchmark interest rates following better-than-expected US inflation data though investors avoided large moves on geopolitical tensions. MSCI's broadest index of Asia Pacific shares outside Japan was down 0.2 percent at the last count.
Japan's Nikkei 225 was down 0.1 percent and Hong Kong's Hang Seng 0.4 percent, though China's Shanghai Composite eked out a gain of 0.1 percent.
S&P 500 futures were down 0.1 percent. On Tuesday, the S&P 500 rose 0.9 percent, the Dow Jones 0.2 percent and the Nasdaq Composite 1.5 percent.
What to expect on Dalal Street
HDFC Securities' Shetti believes the 50-scrip index remains in a positive short-term trend.
"Momentum seems to have picked up after rangebound movement. One should watch levels around 18,600-18,700 as the next target over the next few sessions. Immediate support is at 18,300," he said.
Key levels to watch out for
The maximum call open interest is accumulated at the strike price of 19,000, with 1.5 lakh contracts, and the next highest at 18,800 and 18,500, with 1.3 lakh each, according to provisional exchange data. The maximum put open interest is at 18,300, with 1.7 lakh contracts, and at 18,000, with 1.5 lakh contracts.
This suggests immediate resistance at 18,500 and a strong base at the 18,300 mark.
FII/DII activity
Foreign institutional investors (FIIs) switched to net selling of Indian shares on Tuesday following 11 straight days of buying, according to provisional exchange data. 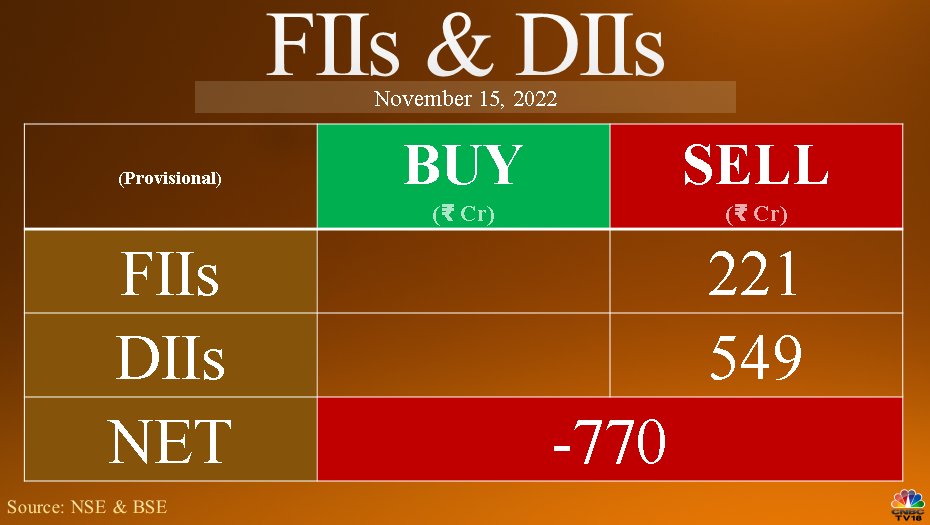