Rupee could sink all the way to 80 a dollar soon. Here's why

Rupee could sink all the way to 80 a dollar soon. Here's why

The rupee took about a month to move to 78 levels against the US dollar since hitting the 77 mark for the first time ever. Experts say it could be headed all the way to 80 soon.

The rupee has hit a series of lows against the US dollar in quick succession, and may be headed to even lower levels soon. Elevated crude oil prices, strength in the greenback overseas and weakness in equities amid sustained foreign institutional outflows continue to batter the domestic currency.

Many experts fear the rupee may hit the 80-mark against the US currency in the coming months.
That at a time when major central banks have lined up aggressive hikes in COVID-era interest rates to suck out liquidity from the system, in response to multi-decade high levels of inflation.
The rupee may hit the 80-mark against the dollar in July or August and stay above it for the next three months before rebounding, Madhavi Arora, Lead Economist at Emkay Global, told CNBCTV18.com.
The rupee's real effective exchange rate — or its value against a basket of 40 currencies — is in an overvalued zone, according to the brokerage. The dollar index — which gauges strength in the greenback against the yen, the pound, the Canadian dollar, the Swedish krona, the Swiss franc and the euro — has appreciated 9.1 percent so far this year. 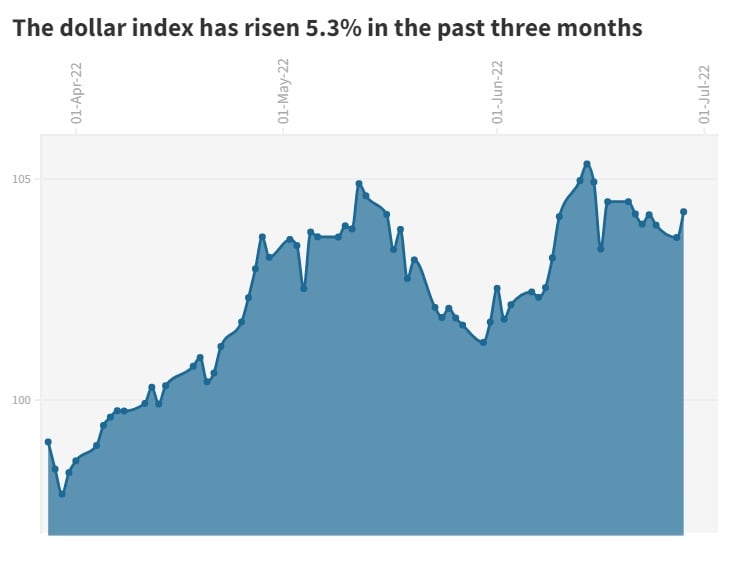 The American currency is supported by safe-haven flows with the markets bracing for aggressive rate hikes by the Fed and the risk of an economic slowdown.
However, India's falling forex reserves, persistently high commodity prices, limited exchange rate pass-through to inflation and elevated rupee valuations will likely tilt the balance towards a less interventionist forex policy in the coming months, Emkay added.
The brokerage believes the RBI "may eventually let the exchange rate adjust to new realities, albeit orderly, letting it act as a natural macro stabiliser to policy reaction functions".
"Allowing the rupee to gently weaken over time is the right strategy, giving the space in the current account deficit to improve," it said. 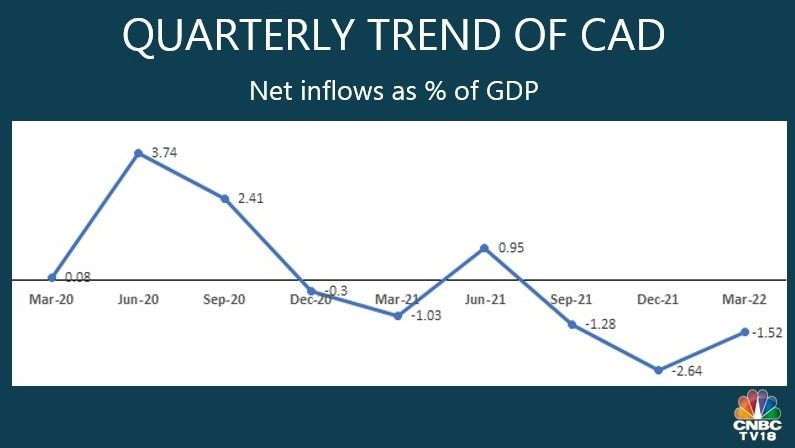 A higher current account deficit can be inferred as an imbalance in the economy with implications on the domestic currency.
Others are of the view that the current trend in the rupee is driven more by sentiments than fundamentals.
"The RBI's intervention also doesn’t seem to help the rupee in the spot market... It has been majorly in forwards, which seem to remain subdued. The panic in the spot market would encourage importers and traders to buy more, and discourage exporters and carry traders to sell. It is a double whammy for the rupee," Amit Pabari, Managing Director at CR Forex, told CNBCTV18.com.
He expects the rupee to hit the 80-mark in the worst-case scenario unless there is a "sustainable and convincing reversal in the dollar index, energy prices and FII outflows".
"The RBI has been supporting the rupee by strong interventions to counter the impact of outflows. This has led to a significant fall in forex reserves. But given a robust accumulation of the forex war chest over the years, the rupee has still been holding up better than emerging market peers, albeit with consistent interventions by the RBI," he said.
In the best case, he sees the rupee at 77.5 to the dollar in the near to medium term, provided there are signs of relief on the Russia-Ukraine front and FII outflows. "There is a huge dollar crunch across Asia amid the heat of outflows felt in the East," Pabari added. Manish Jeloka of Sanctum Wealth expects the rupee to continue to outperform most other emerging market currencies in the near term. "Most of the factors like higher crude and commodity prices affect everyone," he said.
The rupee took little more than a month to breach the 78-mark against the US dollar since hitting 77 for the first time ever — a period that saw most other emerging market (EM) currencies appreciate. This is in stark contrast to its more than two-year long journey from the 76-level.
Catch latest market updates with CNBCTV18.com's blog
Check out our in-depth Market Coverage, Business News & get real-time Stock Market Updates on CNBC-TV18. Also, Watch our channels CNBC-TV18, CNBC Awaaz and CNBC Bajar Live on-the-go!