Deltatech Gaming, a wholly owned online poker and rummy gaming firm of casino operator Delta Corp, on June 16 filed a draft red herring prospectus (DRHP) with the Securities and Exchange Board of India (SEBI) for a Rs 550 crore initial public offering (IPO). Delta Corp shares are down well over 30 percent in 2022 so far. At 12:19 pm, Delta Corp share price quoted at Rs 176.70, up 7.84 percent on BSE.

Shares of Delta Corp Ltd zoomed over 12 percent in trade on Friday after the company's online poker and rummy gaming firm Deltatech Gaming, filed its draft red herring prospectus (DRHP) with market regulator Securities and Exchange Board of India (SEBI) to raise funds through a Rs 550 crore initial public offering (IPO).
"We wish to inform you that Deltatech Gaming Limited (formerly known as Gaussian Networks Private Limited) ("DGL"), a wholly owned subsidiary of Delta Corp Limited (the "Company"), has filed a draft red herring prospectus dated June 16, 2022 ("DRHP") with the Securities and Exchange Board of India, for a proposed initial public offering," the company said in its filing on Thursday.
The initial share sale will comprise a fresh issue of its equity shares of face value of Re. 1 each, for an amount aggregating up to around Rs 300 crore and an offer for sale (OFS) of the Equity Shares held by the company, for an amount aggregating up to about Rs 250 crore. 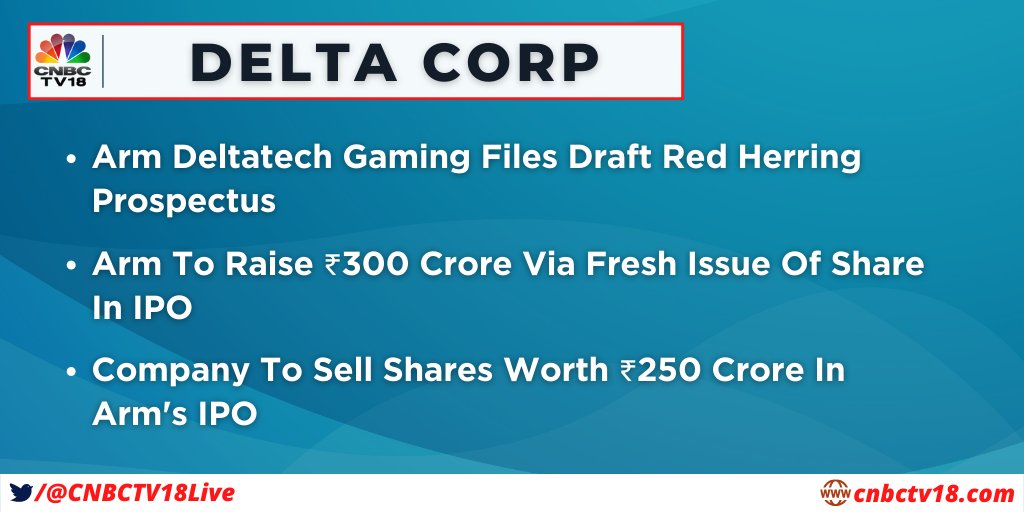 Deltatech Gaming offers real money gaming via Adda52 and Adda.games platforms and had over 55 lakh registered gamers as of FY22-end, as per a Moneycontrol report.
Although market expert Prakash Diwan sees a “huge value unlocking” in Delta Corp, he also cautioned investors.
“There's a huge value unlocking that's been announced. This was something that was on the cards for a long time. And I think it's been done in whatever numbers I've seen, the valuation, which they're seeking, the OFS and fresh money that is being talked about being raised is fairly significant… I will also caution you that there could be opportunities like these where you would probably book out of the stock, make some profits, and you'll get in at lower levels because it's still not from a P&L perspective absolutely out of the woods,” Diwan told CNBC-TV18.
In a separate development, NSE has put Delta Corp stock under the ban for trade on Friday, under the futures and options (F&O) segment. It implies that no fresh positions are allowed for any F&O contracts in the stock when it is under the ban. The securities have been put on ban under the F&O segment as they have crossed 95 percent of the market-wide position limit (MWPL), as per the NSE.