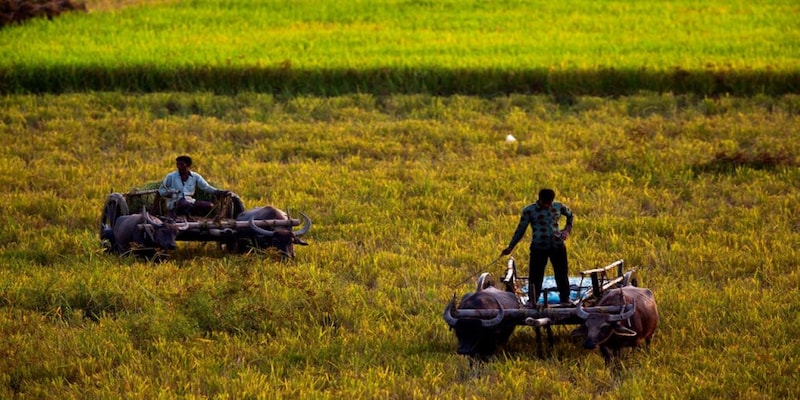 As much as 1.5 lakh hectares of paddy crop were damaged in Punjab due to heavy rain last week. Some areas have seen total crop damage, the state’s agriculture department’s emergency surveys revealed.

The scarcity of rainfall in the monsoon season and the persistent showers in most parts of north India last week have severely damaged Kharif crops in several states, including early varieties of paddy, sugarcane and some vegetables.

As much as 1.5 lakh hectares of paddy crop were damaged in Punjab owing to widespread rainfall last week. Some areas have seen total crop damage, the state’s agriculture department’s emergency surveys revealed.
Apart from causing crop losses, the sudden surge in rain due to the retreating southwest monsoon is expected to delay the harvest of paddy, bajra, and jowar in Uttar Pradesh and Haryana, Business Standard reported.
Farmers fear the rains may cause damage to vegetables sown late in the season in UP. Sugarcane crops have also been impacted in parts of UP.
ALSO READ:
PM Modi to launch projects worth Rs 29,000 crores during his two-day visit to Gujarat
On September 25, western UP received around 29.7 mm of rain, which was 889 percent more than the normal for the day, the India Meteorological Department (IMD) said.
Districts like Bijnor, Etah, Meerut, Bareilly, and Jyotibaphule Nagar received 500-1,000 percent rain more than normal on September 25.
Similarly, Delhi, Haryana and Chandigarh received around 41 mm of rain on September 25, which was 2,832 percent more than the normal for the day.
On the same day, Punjab received around 59.3 mm of rainfall, which was 1,753 percent more than the normal for the day.
As early crops ripened, farmers like Pritam Singh from Nekpur village in Bulandshahr district, UP, had harvested some of the paddies which lay in the fields during the showers. “Owing to water-logging in the fields, the grains have begun to blacken and rot,” Rural Voice quoted Singh as saying.
According to him, paddy was grown on about 450 acres of land in his village and the crops of about 60 percent of the farmers have been damaged.
ALSO READ: IMD issues orange alert in Uttarakhand, rains affect 1.35 lakh hectares of farm area in Punjab
Singh said his village also expected a 25 percent loss in the sugarcane crop.
Meanwhile, the sowing of other vegetables is also likely to get delayed due to the incessant rainfall, according to experts.
“The rain has delayed harvesting of paddy varieties, such as PUSA-1509, which has ripened. As farmers planned to sow potatoes and peas after harvesting this variety, sowing of these vegetables will also be delayed,” Hindustan Times quoted Amritsar chief agriculture officer Jatinder Singh Gill as saying.
(Edited by : Sudarsanan Mani)
Check out our in-depth Market Coverage, Business News & get real-time Stock Market Updates on CNBC-TV18. Also, Watch our channels CNBC-TV18, CNBC Awaaz and CNBC Bajar Live on-the-go!