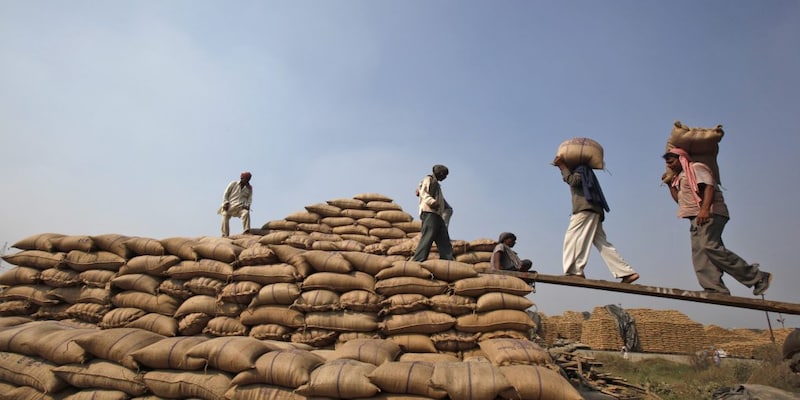 The Finance Ministry was also of the view that the continuation of the scheme for a long period could give the impression of its permanent or indefinite continuation.

Even as the Union cabinet on Wednesday decided to give a three-month extension to the Pradhan Mantri Garib Kalyan Anna Yojana (PMGKAY) or the free ration scheme, sources said that when it comes to the stakeholders of the scheme or to be precise the Finance Ministry, they seemed to have a different view.

Sources at the Finance Ministry told CNBCTV18 that North Block in a communication to the Ministry of Consumer Affairs and Food and Public Distribution‘s department of food had advised the scheme be terminated.
Termination of the scheme was based on specific facts, fiscal implications, global pressures, coupled with the current food grains stock.
The communication stated that the “proposal has substantial fiscal implication of Rs 44,762 crore,” adding, “there is fiscal pressure due to the Russia-Ukraine War, effect on fuel prices, rise in other subsidies.”
According to sources, the communication also added that since the scheme was launched to help combat pandemic-induced hardships and given that the “pandemic has abated considerably, distress for which relief was given doesn’t appear to be prevalent.”
The Finance Ministry was also of the view that the continuation of the scheme for a long period could give the impression of its permanent or indefinite continuation.
“Continuation of the scheme may make it difficult to stop, hence termination is advisable,” and there is a possibility that there may not be adequate food grains to continue such distribution indefinitely given global environment, sources added.
Also Read: Is it a good idea for investors to sit on cash for now? Kotak's Sanjeev Prasad answers
This, was not just the end, rather, the Finance Ministry seemed to have an indication that the government might not be convinced with this logic and could agree for an extension of the scheme and pre-empted that “if scheme is continued, a reduction in quantity may at least be carried out.”
On the other hand, as per the decision taken by the Union cabinet, the government took the call to extend this scheme In pursuance of the pro-people announcement and successful implementation of additional food security under PMGKAY, the Union Cabinet has approved the extension for the Pradhan Mantri Garib Kalyan Anna Yojana (PMGKAY-Phase VII) for a further period of 3 months starting from October to December 2022.
The government did mention that it recognised that people have gone through a difficult period during the pandemic. It has decided to give the three-month extension to the PMGKAY so that the people from economically weaker and vulnerable sections of society are supported during the upcoming festivals such as Navratri, Dussehra, Milad-un-nabi, Diwali, Chhath pooja, Gurunanak Jayanti, Christmas, among others.
“With a view to ensure this, the government has approved this three-month extension so that they continue to enjoy the benefits of easy availability of foodgrains without any financial distress,” a government press release said.
Under this welfare scheme, 5kg of food grain per person per month is provided free of cost for all the beneficiaries covered under the National Food Security Act (NFSA)
The statement also said that financial implication for the Centre has been about Rs. 3.45 lakh crore up to Phase-VI of the PMGKAY. With the additional expenditure of around Rs. 44,762 crore for Phase-VII of this scheme, the overall expenditure would be around Rs 3.91 lakh crore for all the phases.
The total outgo in terms of food grains for PMGKAY Phase VII is likely to be about 122 LMT. The aggregate allocation of food grain for phases I- VII is about 1121 LMT.
So far, PMGKAY has been in operation for 25 months as under
• Phase I and II ( 8 months) : April,2020 to November,2020
• Phase-III to V (11 months) : May 2021 to March 2022
• Phase-VI ( 6 months) : April 2022 to September 2022
Also Read: NSE co-location case: Delhi HC grants statutory bail to Chitra Ramkrishna, Anand Subramanian
Check out our in-depth Market Coverage, Business News & get real-time Stock Market Updates on CNBC-TV18. Also, Watch our channels CNBC-TV18, CNBC Awaaz and CNBC Bajar Live on-the-go!