Parts of Gujarat, Maharashtra, Karnataka, Odisha and Himachal Pradesh are likely to witness very heavy rainfall on Wednesday. Severe waterlogging was witnessed in parts of India including Karnataka and Chhattisgarh. Meanwhile, a depression over coastal Odisha and neighbourhood is likely to "maintain its intensity today and then weaken into well marked low-pressure area over Chhattisgarh and neighbourhood".
Here's a list of states which are likely to witness heavy rainfall today, August 10:
Maharashtra
Heavy rains lashed parts of Maharashtra including Mumbai on Wednesday. An orange alert has been issued in Palghar, Raigad, Ratnagiri, Pune, Bhandara, Satara, Chandrapur, Nagpur and Wardha. Meanwhile, extremely heavy rainfall is likely in Gadchiroli. Light to moderate rainfall is likely in the rest of the state.
On Tuesday, high tides were witnessed along Marine Drive in Mumbai amid rainfall.

Meanwhile, some roads in Kolhapur district were closed after water-logging on some stretches. On Wednesday, the water level of the Panchganga river at Rajaram reached 40.2 feet, as against the warning level of 39 feet and the danger mark of 43 feet, news agency reported officials was saying.
Due to the heavy rains and subsequent flood situation in Kolhapur, Sangli and Satara districts, the examinations of the Kolhapur University scheduled on August 10 and August 11 have been suspended, the district administration said in a statement. The new time table will be announced later, it said. 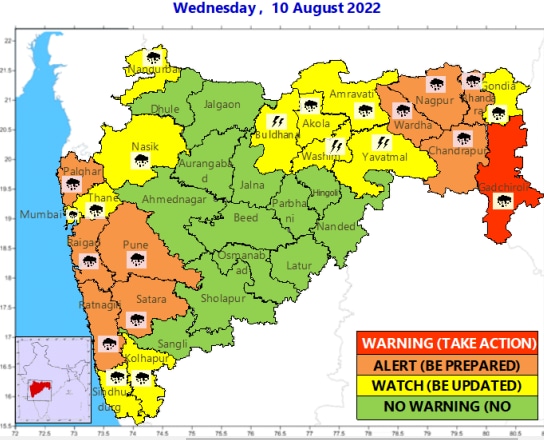 Odisha
A red alert has been issued in Baragarh, Sambalpur, Anugul and Kendujhar. Meanwhile, an orange alert has been issued in Kalahandi, Barangpur, Balangir, Bauda, Bhadrak, Jajapur, Cuttack and Baleshwar. Moreover, heavy rain is also likely in Rayagarha, Koraput, Gajapathi, Ganjam, Khordha, Puri and Kandhmal.
Chhattisgarh
Sukma, Bijapur, Kanker, Narayanpur, Bastar and Dantewara are likely to witness heavy rainfall with the IMD issuing red alerts in these areas. Heavy rain, thunderstorm and lightning are likely to occur over Rajnandgaon, Balod, Kondagaon, Dhamtari, Mahasamund. The rest parts of the states are on yellow alert with some parts likely to experience heavy rainfall.

Madhya Pradesh
Heavy rains lashed Indore, inundating low-lying areas of the Madhya Pradesh city where some cars were swept away due to the strong water current on roads, officials said on Wednesday. A meteorological department official said Indore recorded 108.9 mm rainfall in the 24-hour period ending at 8.30 am on Wednesday.
Andhra Pradesh
River Godavari crossed the first danger level at Sir Arthur Cotton Barrage at Dowaleswaram near Rajamahendravaram in Andhra Pradesh on Wednesday. Alluri Sitarama Raju district, which is yet to fully recover from last month's deluge, is once again in the grip of a massive flood threat as discharge in the river crossed 10 lakh cusecs (cubic foot of water flow per second) mark.
State Disaster Management Authority Managing Director B R Ambedkar said in a release that the current inflow in Godavari stood at 10.37 lakh cusecs. Meanwhile, flood flow at upstream Bhadrachalam in Telangana crossed 12.58 lakh cusecs due to heavy rains in the catchment area.Tributaries of Godavari like Sabari have also been receiving heavy inflow due to the rains.
Karnataka
Heavy rainfall is likely on Shimoga, Chiknagalur, Kodagu, Gulbarga, Dakshin Kannada, Hassan, Belgaum, Dharwad and Udupi. Three people, including two women from the same family were killed in two separate rain-related incidents in the district in the last 24 hours, police said on Wednesday.
Gujarat
A red alert has been issued in Valsad and an orange alert has been issued in Rajkot, Junagarh, Gir Somnath, Bhavnagar, Bharuch, Narmada and Tapi.
Delhi-NCR
No warning has been issued in Delhi-NCR. "Partly cloudy sky" is likely to
prevail in the region.
Kerala
Heavy rainfall is likely in Jasaragod, Kannur, Kozhikode, Malappuram, Palakkad, Idukki and Wayanad. Meanwhile, the water level in Periyar river rose due to continuous rainfall in Kochi and nearby places.

#WATCH Kerala: Water level in Periyar river rises due to continuous rainfall in Kochi and nearby places pic.twitter.com/DYKE45OPtS 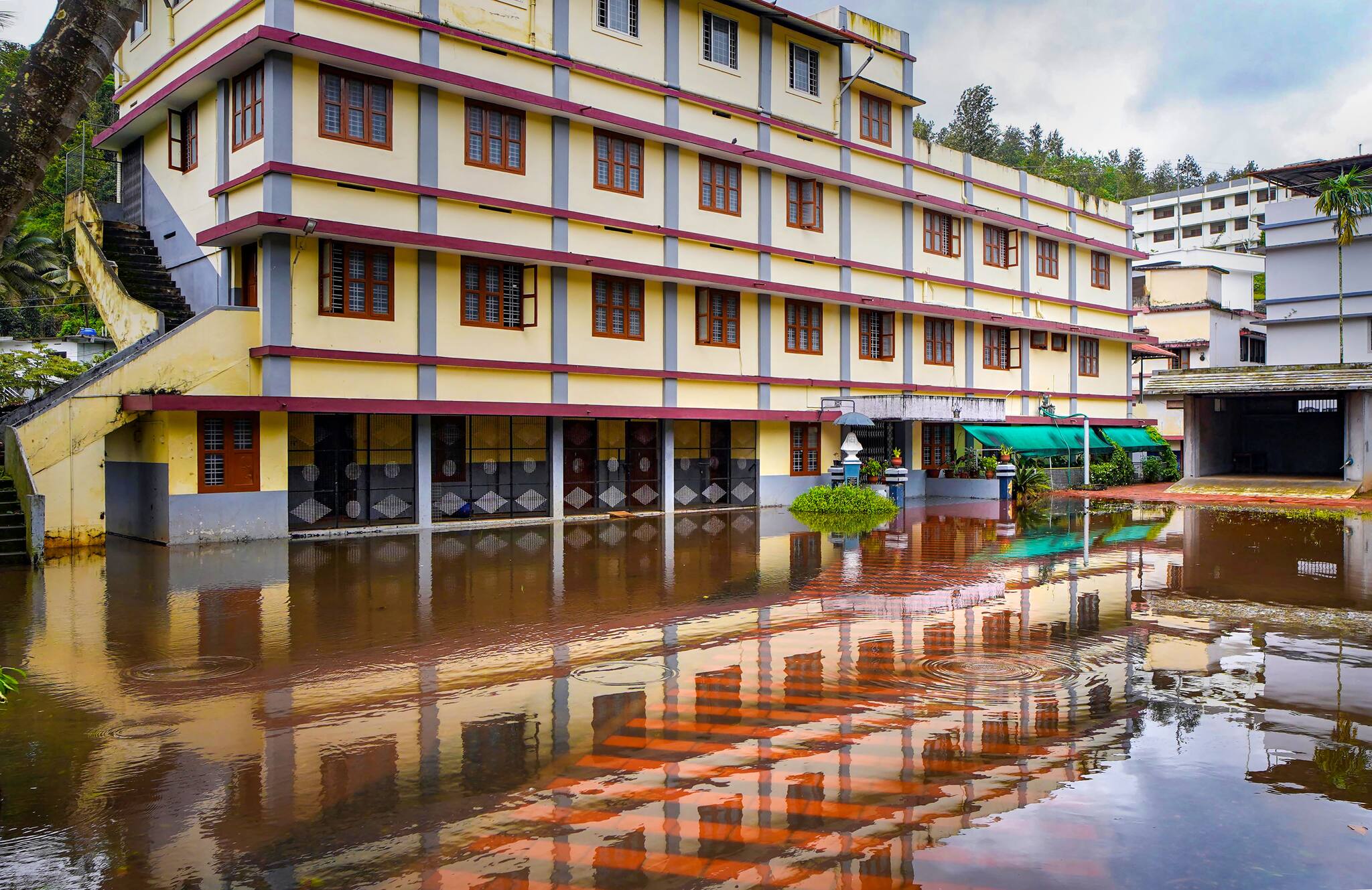