Selena Gomez: My Mind & Me review | Inside the chaotic head of a beloved superstar

Selena Gomez: My Mind & Me review | Inside the chaotic head of a beloved superstar

Directed by Alek Keshishian, the film follows Selena Gomez intimately through unarguably the roughest patch of her life so far as she fights lupus, undergoes a kidney transplant, gets diagnosed with bipolar disorder, learns to live with it, and tries to inject meaning and joy into her every day.

Selena Gomez’s new AppleTV+ documentary opens with her saying, “Let me make a promise. I’ll only tell you my darkest secrets.” In the 95 minutes that follow, she keeps it, taking you inside her home, head, and heart, revealing all that has kept her in the news in the last six years and so much more.

Explained: Pakistan economy on the edge of collapse — why India may be worried

Budget 2023: Unleashing India’s growth potential in the years to come

Directed by Alek Keshishian and co-written by him and Paul Marchand, Selena Gomez: My Mind & Me follows the singer-actor intimately through unarguably the roughest patch of her life so far as she fights lupus, undergoes a kidney transplant, gets diagnosed with bipolar disorder, learns to live with it, and tries to inject meaning and joy into her every day.
The film starts in Paris in 2019. Gomez is in her makeup chair getting ready. The camera zooms into a closeup. Her face is dolled up but it’s listless, opaque. There’s no light in her eyes, not a whisker of joy or even the possibility of it. Next, we see her in a moving car lying down on the lap of her friend Raquelle Stevens, who is a constant throughout her entire journey. She asks Gomez how she’s feeling. “I’m very tired,” comes the reply.
We are then made privy to one of Gomez’s journal entries from December 2019. “I have to stop living like this,” it reads. “Why have I become so far from the light? Everything I ever wished for…I’ve had and done all of it. But it has killed me.” And so the film begins.
It encapsulates all of it—the global media frenzy, the relentless speculation, the back-to-back interviews that reduce celebrities to commodities, the unending exhaustion of trying to time with a clock that never stops, the pressure of superhuman expectations, the nagging fear of not being good enough, and the fragility of superstardom. The documentary makes us meet the person behind the name we know so well. Raw, honest, and disarming, it’s the kind of meeting that you don’t forget about, that you draw solidarity from, the kind that lingers on, sometimes for years. 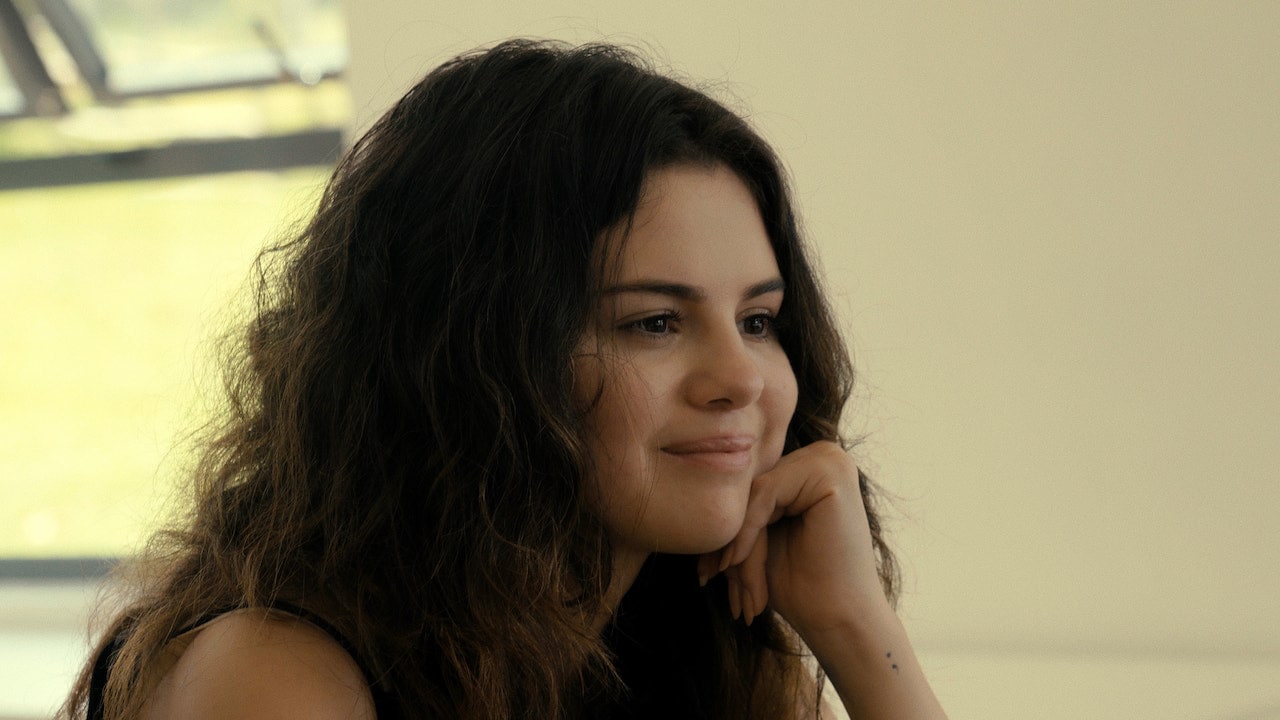 Selena Gomez in a still from the movie. (Image: AppleTV+)
Gomez’s ill health spiraled beyond her control right before her Revival tour in 2016, which got canceled after 55 performances. It’s during one of the early rehearsals that we see her break down for the first time and the gravity of it. Soon enough, she writes in her diary, “I wish you could feel what it feels like to be in my head.” Considering she’s been in the spotlight ever since she was seven, it’s not surprising that the voices inside her head sometimes get louder than the maddening cacophony that surrounds her and that she shut down the way she did. What’s surprising is that it didn’t happen sooner.
The beautiful thing about Selena Gomez: My Mind & Me is that it doesn’t hide anything, however uncomfortable, difficult, messy, or ugly, including her highly public relationship with Justin Bieber. The film treats it as background noise—it’s alluded to largely through news snippets. At one point during their time in Masai Mara, Stevens even jokes about it.
What also makes the documentary incredibly personal is the rare footage from Gomez’s childhood and growing up years that it keeps intercutting into, and her journal entries. They are illuminating and speak volumes about a mind at war, steeped in such darkness that it has begun to question light. Sample these. One entry reads, “Just stop trying. No one cares about what you’re doing. It’s about who I am being okay with where I am.” Another says, “Get out of your way.” A third: “My world is so empty. My world is so big and cold. I want joy and hope.
"Clean air where I can finally breathe. What has been is not what will be."
Gomez finds joy, hope, and the clean air that she was desperately looking for in Masai Mara, Kenya. She goes there to meet the students of a local school and spread awareness about mental health. Not even half as pretentious or oblivious of her white privilege as Leonardo DiCaprio was in Before the Flood, his 2016 documentary on climate change, she engages in conversations that don’t feel as phony. One kid asks her about her school education. She tells how she went to school till Class 8 and then was homeschooled by a computer on set. “It was not real. But it was great. For me, it worked,” she says. Then there’s another scene in which Gomez asks a girl about love. The African teen responds that it’s a luxury she cannot think about until she has found her feet through education.
Her trip to Kenya shifts something in Gomez. Erstwhile a deer caught in headlights, she returns as a woman fueled by a worthy purpose. She decides to help herself by helping others. A lot like what Priyanka Chopra’s character does with Kangana Ranaut’s in Madhur Bhandarkar’s 2008 film Fashion. I also loved how Keshishian and Marchand toy with the concepts of reality and escapism in a talk that Gomez and Stevens have in Kenya. And how, through Gomez’s quest for happiness, they illustrate that it is not found in the extraordinary as much as it is in what truly anchors us.
In baring her struggles with mental health, Gomez has again brought to the fore the need to talk about it as much as can be. “The more you learn about it, the less you are going to be afraid of it,” she says. Considering the enormity of her celebrity, the documentary will be watched by millions who will find out, yet again, that no kind of darkness is truly impenetrable and that whatever it is that they might be going through, they are not alone.
You can watch Selena Gomez: My Mind & Me on AppleTV+.
Read other pieces by Sneha Bengani here.
Check out our in-depth Market Coverage, Business News & get real-time Stock Market Updates on CNBC-TV18. Also, Watch our channels CNBC-TV18, CNBC Awaaz and CNBC Bajar Live on-the-go!