RBI’s third rate hike comes as part of its efforts to control inflation that hit a multi-year high recently, forcing major central banks across the world to take this path.

The Reserve Bank of India's Monetary Policy Committee (MPC) has decided to increase the repo rate — the rate at which the central bank of the country lends funds to the commercial banks — by 50 basis points (bps) to 5.40 percent in its bi-monthly policy meeting, Governor Shaktikanta Das said on Friday. One basis point is one-hundredth of one percentage point.
This was the second 50 bps hike in a row. The RBI has hiked the policy rate three times in a row now.
This decision comes as part of the RBI’s efforts to control inflation that recently hit a multi-year high, forcing major central banks worldwide to take the rate hike path.
“The MPC remains focused on the withdrawal of accommodation to ensure inflation remains within target going forward while supporting growth,” said Das while announcing the policy.
With this hike, the repo rate is returning to pre-pandemic levels, the highest since August 2019. 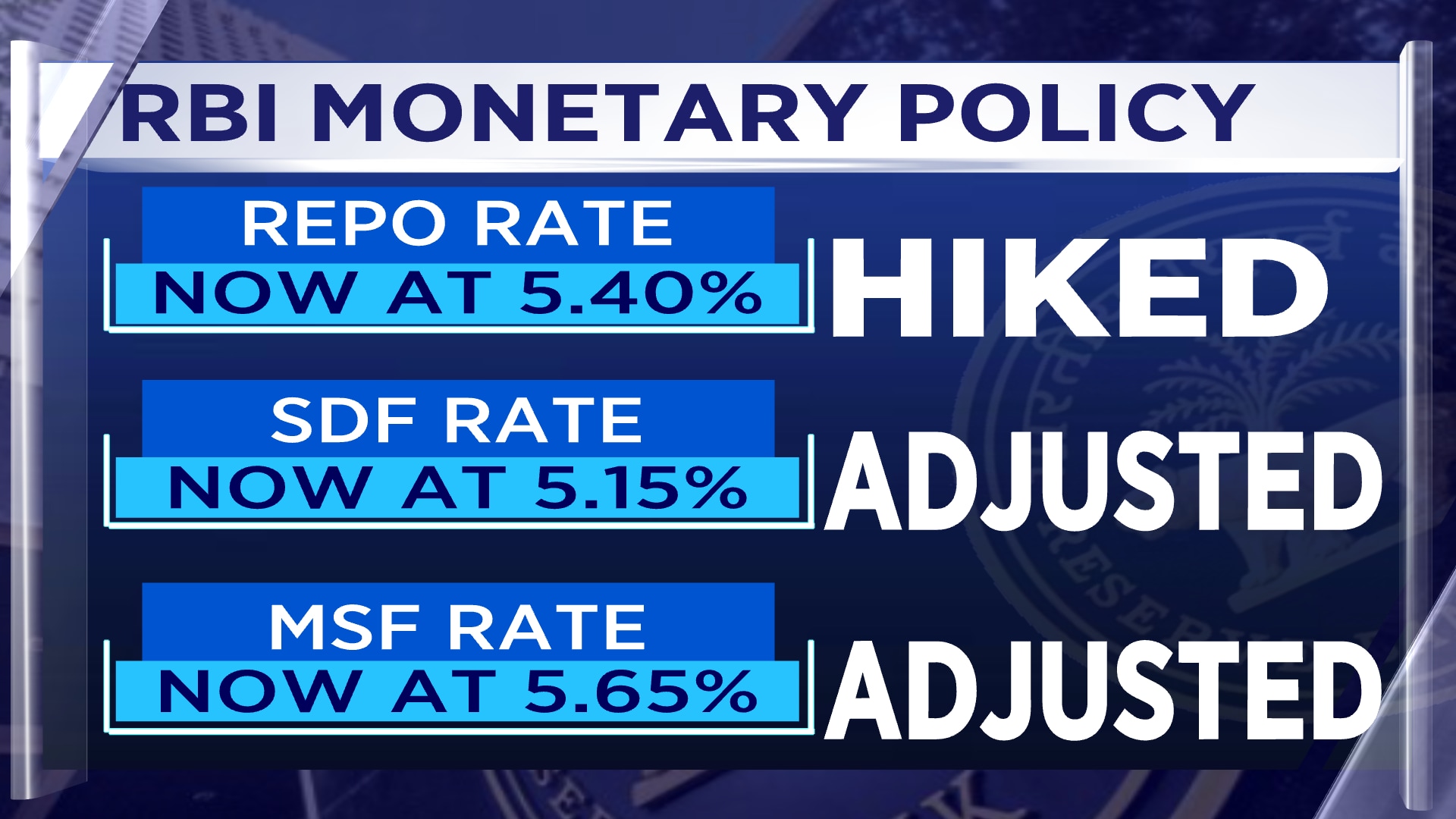 Also Read:
Your home loan set to hit a three-year high as RBI hikes repo rate: Check details here
After a long pause during the COVID-19 period, the RBI started the rate increase cycle in May this year with a 40-basis-point hike in an unscheduled announcement. This was followed by another rate hike of 50 basis points in June.
The three-day RBI policy meet started on August 3 and ended today, with the committee unanimously deciding to increase the repo rate. The latest rate hike is largely in line with the Street's expectations.
Also Read: NRIs can pay now pay for bills in India directly
A CNBC-TV18 poll of economists and market watchers had predicted a 35 bps hike. A majority believe that the repo rate will be at 5.75 percent by December this year and touch 6 percent by the time this rate hike cycle ends.
According to the central bank, the domestic economy faces headwinds from global forces such as geo-political tensions, rising financial market volatility, tightening financial conditions and recessionary concerns.
However, Das said, "our umbrella remains strong". With strong and resilient fundamentals, India is expected to be the fastest growing economy in FY23, according to him. Also Read: GDP growth projection for 2022-23 is retained at 7.2%: RBI Guv Shaktikanta Das
He said that the country's current account deficit would remain within comfortable limits, adding that external debt to GDP fell from 21.2 percent in March 2021 to 19.9 percent in March 2022.
"India's financial sector remains well capitalised and sound and forex reserves provide insurance against global spillovers," the RBI governor said.
However, he added that sustained high inflation could destabilise expectations and harm growth in the medium term. "Inflationary pressures are broad-based, core inflation remains at elevated levels," said Das. Also Read: RBI retains retail inflation forecast at 6.7% for FY23
RBI said that the investment activity is picking up with the capacity utilisation in the manufacturing sector now above its long-term average and bank credit growth accelerating to 14 percent year-on-year as of July 15.
RBI said that it would remain vigilant on the liquidity front and conduct two-way fine-tuning operations (VRR and VRRR) as warranted. It said that surplus liquidity has come down to Rs 3.8 lakh crore during June-July.
On rupee depreciation, the governor said, "Depreciation of INR is more on account of appreciation of USD than weakness in fundaments of Indian economy." He said RBI had ensured orderly movement of the rupee.
Also Read: View: RBI moves quickly to stabilise forex rate but these measures might help rupee more
Catch LIVE updates on RBI policy here
Click here for other market news.
Check out our in-depth Market Coverage, Business News & get real-time Stock Market Updates on CNBC-TV18. Also, Watch our channels CNBC-TV18, CNBC Awaaz and CNBC Bajar Live on-the-go!
Tags