World Cancer Day 2023: A way forward to better management of cancer this year!

Pakistan economy at alarming level as foreign reserves drop to $3.1 billion from $16.6 billion in a year

L&T Technology Services, the engineering services arm of Larsen and Toubro expects the current quarter to be subdued due to a host of festivals falling under the same quarter. "That does not mean we will not grow in Q3 but it will be subdued," MD & CEO Amit Chadha told CNBC-TV18 in an interview.
However, the company has revised the lower its full-year guidance for to 15.5-16.5 percent from the earlier guidance of 14.5-16.5 percent. The management also switched to forecast growth in constant currency terms owing to the volatility of the US Dollar and other currencies.
For the September quarter, the company became the first pure-play engineering company to achieve $1 billion run-rate in constant currency. The company last year had guided that it will manage to achieve this landmark in the September or December quarter this year.
L&T Tech also managed to defy concerns in Europe due to the prevailing geopolitical tensions, ending the quarter with a record high Total Contract Value. The management also said that the company has visibility to double its bookings in the current financial year. Europe contributes to 17 percent of L&T Tech's overall topline.
On the financials front, the company reported constant currency revenue growth of 4.5 percent compared to the previous quarter. While the topline in both rupee, as well as US Dollar terms, was in-line with a CNBC-TV18 poll, the EBIT margin drop of 15 basis points was better than the anticipated 75 basis points drop. During the quarter, the company won a deal within the transportation segment worth over $60 million and another deal with a total contract value of $10 million. This is the third straight quarter of L&T Technology Services winning deals between $50 million to $100 million.
Shares of L&T Technology Services are down 4.7 percent to Rs 3,502 as of 2:30 PM. The stock has corrected nearly 40 percent this year so far.
CEO Chadha says that while deal wins have remained stable over the last three quarters, the company aspires to hold EBIT margin at 18 percent, which is what it reported for the June-September period. 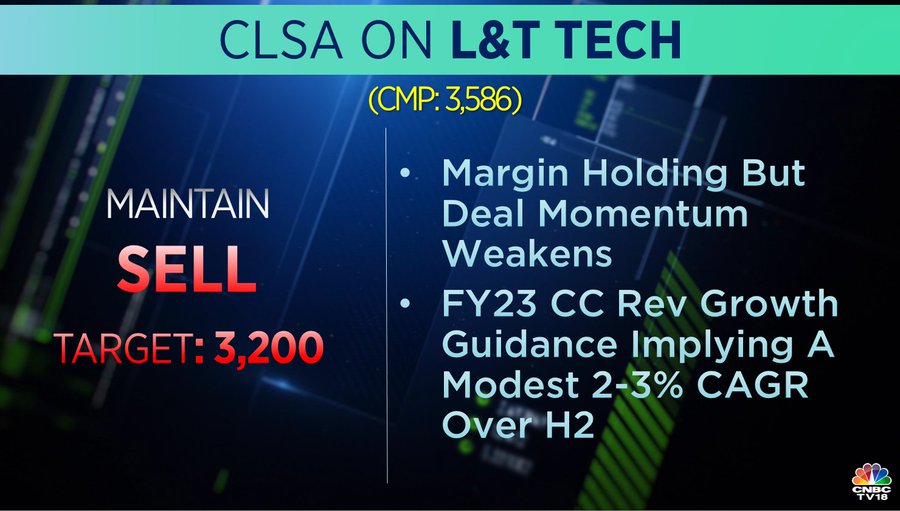