Zee-Sony merger gets CCI nod: With clearance from the competition watchdog, the proposed deal — to create India's strongest entertainment network — has crossed a key milestone.

TRADE
Zee Entertainment Enterprises and Culver Max Entertainment, formerly known as Sony Pictures Networks, will together create India's largest entertainment network, with over 75 TV channels, after the merger deal received conditional approval from the fair trade regulator Competition Commission of India (CCI). Analysts will closely track any modifications in the proposed combine by both groups.
The development assumes significance as it brings a sigh of relief to investors amid concerns about the merged entity's market dominance on the TV viewership, advertising fee and channel pricing fronts. According to an initial assessment by the regulator, the proposed deal would leave the merged business in a strong position with roughly 92 channels in India. It observed that the consolidation has the potential to hurt competition by providing "unparalleled bargaining power".
Analysts see the proposed scheme of amalgamation as a win-win situation for both groups. Elara Capital believes the target entity will have the following synergies: Here's what the Zee-Sony combine means for the market:
Sony Pictures Networks has said the merged entity would create extraordinary value for Indian consumers and eventually lead the consumer transition from traditional pay TV into the digital future.
Zee Entertainment CEO Punit Goenka will be the MD and CEO of the target entity, and a majority of board members of which will be nominated by the Sony group. Zee Entertainment Enterprises shares jumped by as much as Rs 16.3 or 6.1 percent to Rs 283.8 apiece on BSE after the news, as Dalal Street resumed trading following a day's holiday. 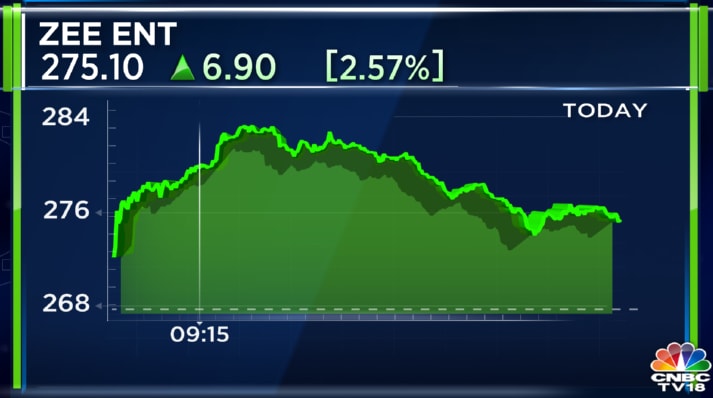 Meanwhile, a large deal took place in Zee Entertainment shares. A total of 11.37 lakh shares — representing 0.1 percent of the company's equity — worth Rs 32.5 crore changed hands at an average price of Rs 278.2 apiece.
Sony and Zee had announced their deal last year to integrate their TV stations, film assets and streaming platforms to build a media and entertainment powerhouse with a viewer base of 1.4 billion.
Catch latest market updates with CNBCTV18.com's blog
Check out our in-depth Market Coverage, Business News & get real-time Stock Market Updates on CNBC-TV18. Also, Watch our channels CNBC-TV18, CNBC Awaaz and CNBC Bajar Live on-the-go!
Tags