HCL Tech's management has expressed confidence that there are no signs of slowdown in deal pipeline until the next financial year.

HCL Technologies Ltd. is most likely to maintain its guidance for the current financial year when it reports its September quarter results on Wednesday. The company had guided for 12-14 percent in revenue growth and margin to be in the lower end of the 18-20 percent range for financial year 2023.
However, most estimates on the street are building in the fact that the company will not be able to meet its guidance, at least on the margin front. For instance, brokerage firm Ambit believes that HCL Tech's margins for the current financial year would stand at 17.7 percent.
A CNBC-TV18 poll expects HCL Technologies to report 1.5 percent dollar revenue growth compared to the June quarter. Net profit and revenue in rupee terms are also likely to register growth in low-single-digits, while EBIT margin is likely to expand by 40 basis points, despite the wage hikes that took effect from July 1 this year. 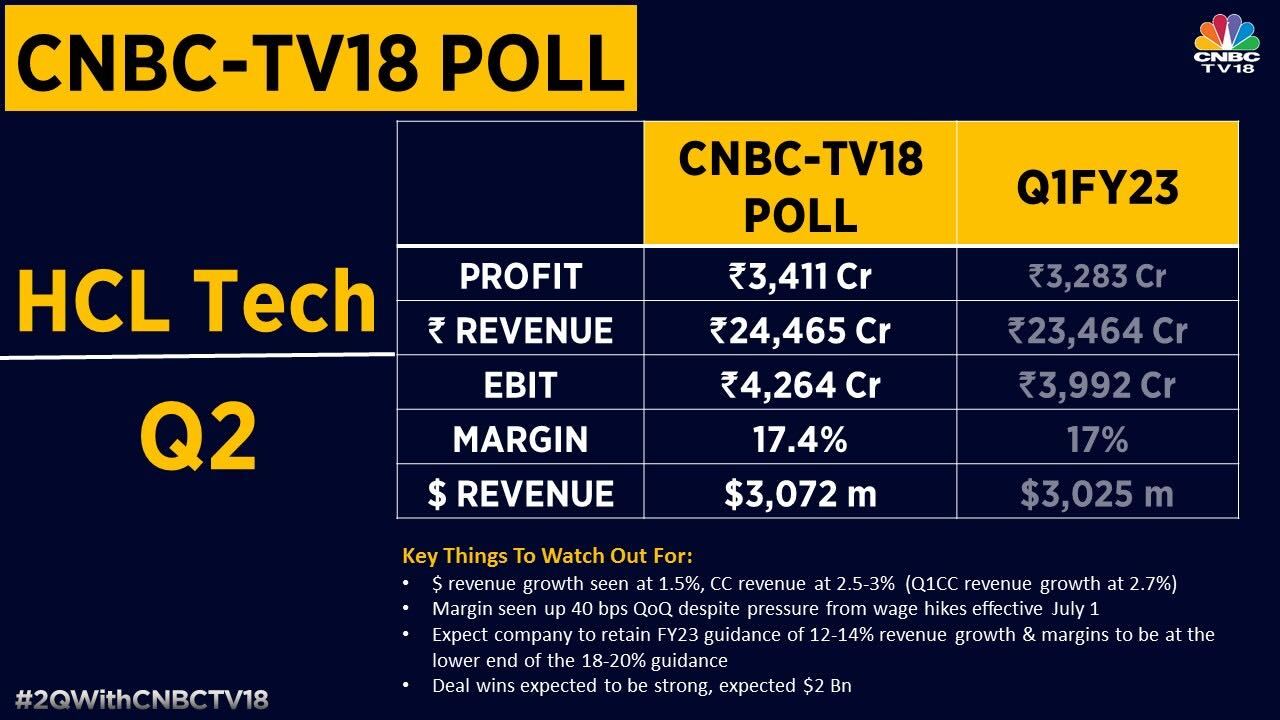 HCL Tech's margins have been in focus as they declined 100 basis points in the June quarter, despite no wage hikes taken back then. The miss came from the services business margin, which declined 150 basis points from the previous quarter, due to higher outsourcing, employee retention and travel and visa costs.
During the June quarter earnings, the management expressed confidence that margins have bottomed out at the 17 percent mark and that they will improve over the next two quarters. They attributed the drop in margins to some expected price hikes getting pushed forward, along with high employee costs. 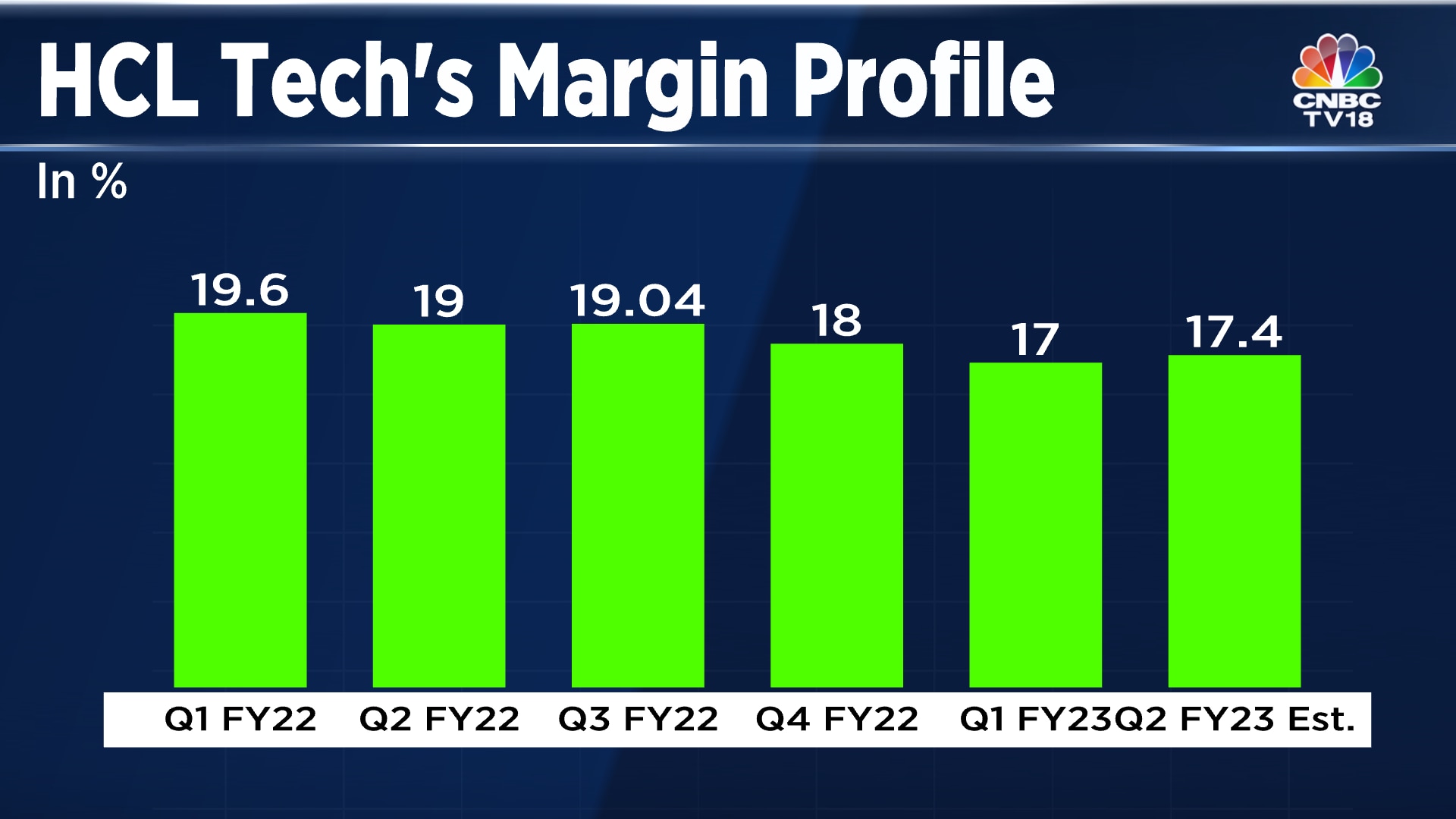 The company is likely to report deal wins worth $2 billion during the September quarter, a number it has managed to maintain for four straight quarters so far. It registered deal wins worth $2.05 billion during the June quarter, which although were down 9.1 percent from the March quarter, but grew 23.4 percent from last year. Annual contract value of the deals had also increased nearly 18 percent year-on-year.
While many companies remain cautiously optimistic about their future deal pipeline. TCS mentioned in its quarterly results that they see no reason to change their $7 billion - $9 billion quarterly deal win pipeline, but did not increase it either.
Also Read: Wipro Earnings Preview: Wage hike impact, moonlighting commentary in focus
On the other hand, HCL Tech's management mentioned during the June quarter that they see no signs of slowdown even for financial year 2024, and that they are more optimistic on demand than what they were in April. It will be interesting to observe their commentary on future deal wins. 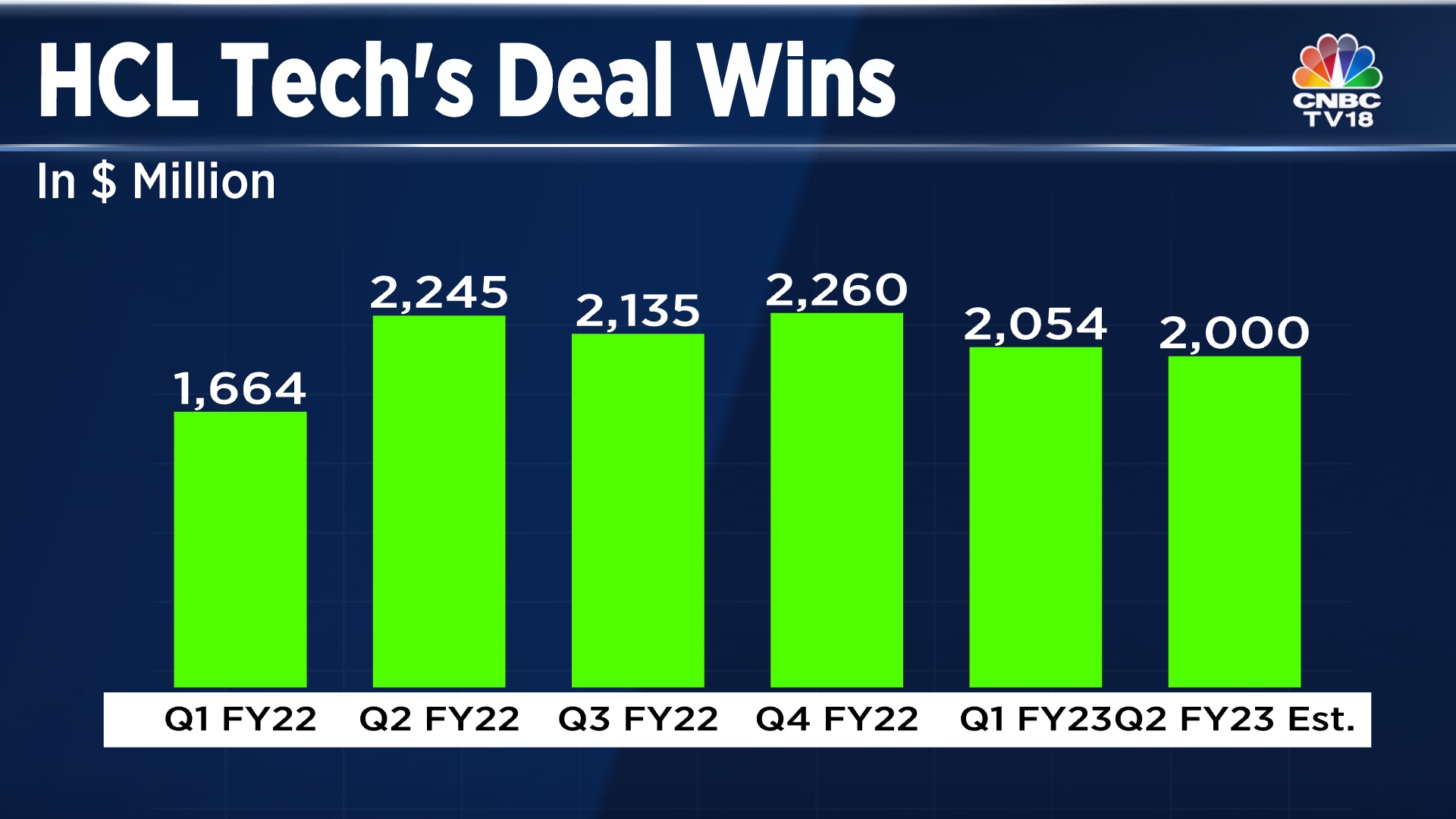 On the attrition front, the company's attrition during the June quarter had increased to 23.8 percent from 21.9 percent in the March quarter. They have a fresher-hiring target of 30,000-35,000 for the current financial year, which is nearly 50 percent higher than the previous one.
It remains to be seen what is the progress on the onboarding of 10,000 freshers that was part of the plan highlighted by the management during the June quarter.