Monsoon rainfall stands below normal so far this year in the country. The total rainfall, according to IMD, was 42 percent below the long-period average in the June 1-8 period.

With the onset of the monsoon — though delayed — in many parts of India, the rainfall deficit situation is improving in the country. The pan-India rainfall deficit, which was 37 percent between June 1 and June 13, has fallen sharply in the last few days to 25 percent.
The India Meteorological Department (IMD) earlier predicted a normal monsoon this year, with rainfall at 103 percent of the long-period average (LPA).
LPA is a benchmark for forecasting quantitative rainfall for a region for a period. The benchmark is based on the average rainfall recorded in a region over a long period, such as 30 years and 50 years.
However, rainfall stands below normal so far this year in the country. The total monsoon rainfall, according to IMD, was 42 percent below the LPA in the June 1-8 period.
Monsoon reached Kerala — the entry point for the Southwest monsoon in the mainland — on May 29, three days before June 1, when it is usually expected, but most parts of the country have seen little rains.
While the southern region of India currently shows a rain deficit of 31 percent, the central Indian stands with a shortfall of 60 percent.
According to the IMD website, between June 1 and June 16, the entire country, except a few states like Nagaland, Sikkim, West Bengal, and Andhra Pradesh, saw a deficiency in monsoon rainfall.
States like Madhya Pradesh, Chhattisgarh, Uttar Pradesh, Odisha, Jharkhand, Haryana, Uttarakhand, Punjab, and Himachal saw large deficiency of 60 percent to 90 percent. Whereas the rain shortfall was between 20 percent and 59 percent in Rajasthan, Gujarat, Karnataka, Maharashtra, Telangana, Kerala, Goa, Bihar, Tripura, Manipur, and Mizoram. 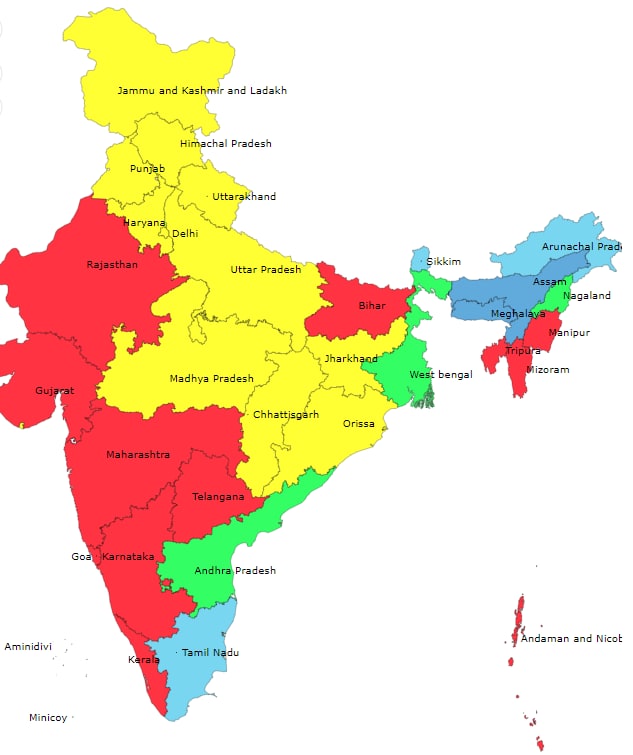 *Yellow indicates large deficiency (60 percent to 90 percent); red indicates deficiency (20 percent to 59 percent); green indicates normal or near-normal rainfall. Source: IMD (from June 1 to June 16)
In an interview with CNBC-TV18, GP Sharma, President of Metrology & Climate Change at Skymet, had earlier said that things were not looking "rosy" for the monsoon in the first half of June.
However, the situation will likely improve further as monsoon hits several parts of central India, which are yet to be covered. Usually, central India is covered by June 15.
The IMD on June 15 said the rainfall activity is likely to increase in Bihar, Jharkhand, and Odisha, among other states going ahead.
“Rainfall activity likely to increase gradually over Bihar, Jharkhand, Odisha and Gangetic West Bengal with fairly widespread to widespread rainfall with thunderstorm/lightning/gusty winds during next 5 days," it said.

Rainfall activity likely to increase gradually over Bihar, Jharkhand, Odisha and Gangetic West Bengal with fairly widespread to widespread rainfall with thunderstorm/lightning/gusty winds during next 5 days.

"Southwest Monsoon has further advanced into some more parts of Arabian Sea, some parts of Gujarat, entire Konkan, most parts of Maharashtra & Marathwada, Karnataka, some parts of Telangana & Rayalaseema, some more parts of TN, most parts of SHWB, some parts of Bihar," it had tweeted on June 13.
The progress of the monsoon takes place in three phases: 1-15 June, 15-25 June, and 26 June-July 8.
The first phase covers the Western Ghats, Northeast India, along with Bihar, Jharkhand, West Bengal and Odisha. In the second phase, the monsoon advances from south Gujarat to north Gujarat and Rajasthan while also making a big splash in Bihar, Jharkhand, Chhattisgarh, UP, MP, Uttarakhand and Himachal, J&K and Ladakh. In the third phase, the two streams — the Bay of Bengal branch and the Arabian Sea branch — cover the entire country.
The rain shortfall comes at a time when India is witnessing record inflation in food prices. The monsoon is India's largest source of irrigation for crops and is essential to boost output and bring down prices.
"The weak start to the monsoon has delayed the sowing of crops by some farmers," ITC's S Sivakumar told CNBC-TV18 recently. "The monsoon commencement has been weak, and the first 10 days of June have seen 40 percent deficient monsoon," he had said, adding, "slowly, we are catching up".
Check out our in-depth Market Coverage, Business News & get real-time Stock Market Updates on CNBC-TV18. Also, Watch our channels CNBC-TV18, CNBC Awaaz and CNBC Bajar Live on-the-go!